When asked to identify who he is, most Australians are stumped. Few can name him and fewer still know what he is famous for or indeed why he is featured on our banknote at all. He is in fact, David Unaipon of the Ngarrindjeri people of South Australia. Credited with designing a modified version of shearing shears by changing the once circular blade to a straight one, Unaipon was an extraordinary man of giant intellect, a true visionary and thought leader of his time. Despite his relative anonymity, Unaipon has been compared to the great Leonardo Da Vinci for his scientific imaginings on a range of subjects from perpetual motion, mechanical propulsion and multi-radial wheels. Ahead of his time, he drew designs for a helicopter based on aerodynamic principles of the boomerang and researched the polarization of light in the discipline of physics. A published author of Aboriginal mythology, David Unaipon was also an expert in ballistics.

So who was this extraordinary Aboriginal man and why do most Australians know so little about him?

Unaipon’s name is an Anglicisation of his Indigenous name Ngunaitponi.

Born and raised on a mission in the Coorong region of South Australia (Point McLeay/Rauukan? During the late nineteenth century, he was the fourth of nine children. His formal education was minimal, leaving school at 13 to work as a servant in Adelaide where his employer actively encouraged his eclectic interest in literature, music, science and philosophy. He returned to the mission in 1890 to take on a boilermaker apprenticeship. He travelled to Adelaide soon after to find work in his chosen profession but was unable to do so because of his colour. He took a job as a storeman instead before eventually returning to the mission to work as book-keeper for the mission store. He later married and became a preacher for the Aborigines (sic) Fried Association that allowed him to travel freely. He soon gained notoriety because of his achievements and was in great demand as a public speaker. 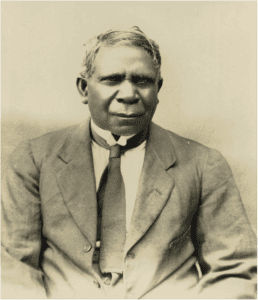 Unaipon’s achievements are all the more remarkable given his Indigenous background and the times during which he lived when many Aboriginal people faced much prejudice and discrimination.

He remains an inspiration and role model for all Aboriginal people and a truly Australian icon.

What are the four features of Cultural Competence?
7 Ways To Keep Showing Up After January 26th
IndigeneiTEA
Download article as PDF
Previous Post Respectful terminology Next Post What’s with Wrong Skin?