The Courage to Say Yes to Love and Belonging 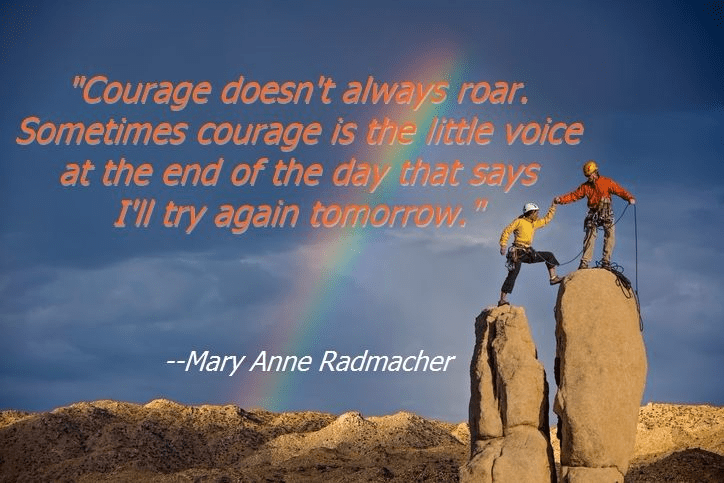 While most angles of the debate have been covered, people are often curious about Evolve’s take on marriage equality through a ‘cultural’ lens. When we say cultural lens, we mean through the eyes of our Indigenous and non-Indigenous team members who are passionate about creating inclusive organisations where everyone is valued and feel they belong.

By seeing the wisdom in all people and cultures, we bring people together by Closing the Gap between Indigenous and non-Indigenous Australians. Our programs change lives. Our vision is for a kinder and more unified Australia drawing upon wisdom of the Dreamtime.

Our core values that support us on this journey are primarily based on universal human needs such as the need to connect, create, contribute, have choice, clarity and continuity. Underlying all of this is courage.

But as Mary Anne Radmacher eloquently reminds us, courage need not be loud or rambunctious. “Courage”, she says “does not always roar.” Sometimes courage is the quiet voice at the end of the day saying, ‘I will try again tomorrow.” This is the kind of courage and resilience we believe the Australian people showed in spades with the recent marriage equality vote. The courage to say ‘yes’ was a ‘yes to equality’ and more importantly a ‘yes to belonging’.

Indigenous cultures have a strong sense of belonging that comes from placing family, land and community at the heart of all they do. In our one day Belonging in the Workplace™ program, we explore Indigenous concepts of family and what it means to belong. We look at how organisations can foster this profound sense of kindredness and belonging to benefit all employees and boost staff morale regardless of whether they are Indigenous or not.  As Munya Andrews teaches,

“In Aboriginal kinship, there are no orphans, no outsiders. Everyone belongs, for everyone and everything is interrelated and interconnected.”

This includes those who love someone of the same gender.

​​​The fact that the marriage equality postal vote occurred in the year of the 50th anniversary of the 1967 Referendum was not lost to us at Evolve. We immediately looked for parallels between the two. In that referendum Australians voted overwhelmingly (90%) to amend the constitution to include Aboriginal people in the census and allow the Commonwealth to create laws for them. Like many diversity and inclusion specialists we were disappointed that the decision to allow same sex couples to marry came down to a vote rather than a referendum or other political decision. My disappointment was captured in a letter to the editor that was published in the Sydney Morning Herald as follows:

“So the High Court ruling is in. I feel a deep level of shame, isolation and sadness that my family, community and country are being asked if I am acceptable and equal in their eyes. What if they vote no? I would prefer the status quo then to have to ask. And while not comparable, it echoes the 1967 referendum – that we even had to ask. What did we learn?”

Despite my disappointment I was encouraged to discover support for the ‘Yes’ vote came from unexpected quarters, namely from multi-cultural Australia as reported by Eryk Bagshaw in the Sydney Morning Herald, November 18, 2017:

“An analysis of electorates where more than 40 per cent of the population was born overseas shows they overwhelmingly backed same-sex marriage outside the Western Sydney ring. From Moreton in Queensland through Reid in NSW to Gellibrand in Victoria, a clear majority of electorates with large Chinese, Indian, Vietnamese and Arabic-speaking communities got behind the move to change the definition of marriage”.

Through our cultural lens, we believe that all people are equal and have a right to feel that they belong, are valued and included. The benefits to business are a no brainer as attested by the support of large organisations like Qantas, Holden, Kmart, Target, McDonalds, Channel Ten, Virgin…to name a few. Simply put, happier employees are more productive.

We are thrilled that that Australia has said ‘yes’ to including a large group within our society.

While we recognise that the ‘yes vote’ was bitter sweet for many Indigenous Australians coming so soon after the decision to not establish a new Indigenous advisory body, let’s hope that our steps towards a more inclusive Australia continue to thrive and become more inclusive of all Australians regardless of their race, ethnicity, gender or sexuality.

Three Steps to Transform Difficult Conversations
Getting Back To Nature
What’s wrong with fake art?
Download article as PDF
Previous Post Journey into the Dreamtime – PART TWO Next Post Language Hacks: Are you ‘blocking’ your creativity?